On March 19th, admissions officers from 18 universities of the United States, the United Kingdom, Australia, and Canada gathered at Guiyang-China New World International School. 2018 Spring College Fair was successfully held in our gymnasium where more than 100 students and parents had a face-to-face communication with world-renowned recruitment officers. 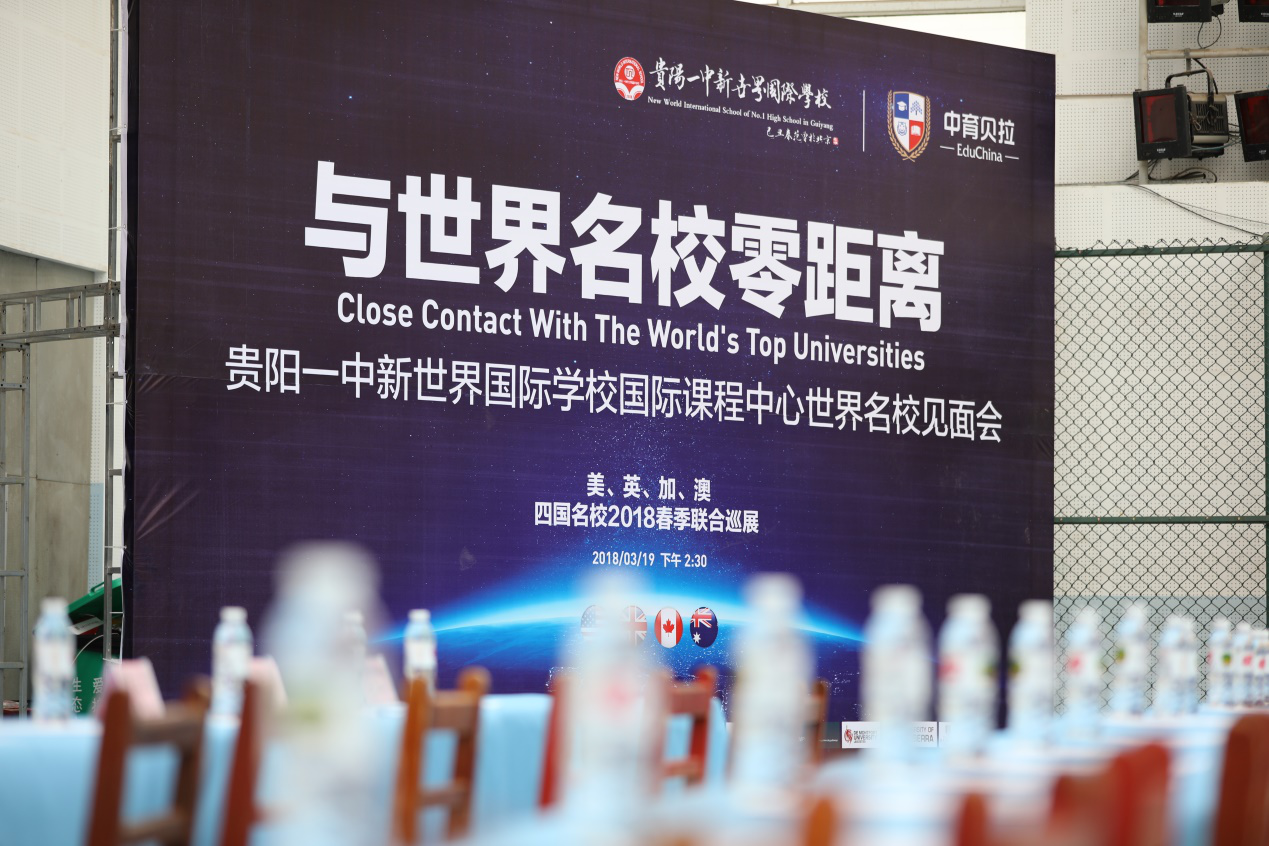 Professor Zhou Mo, Vice Principal of the Guiyang New World International School, Dr. Stephen Mohan, Academic Dean of Level International Program Center, Zong Ling, Executive Director of the Central Beagle Education Group, Zhang Haibin, Director of Regional Curriculum and Xinxiang Teaching Program, Zhai Yizhen, Director of Guidance Center for Higher Education, Senior leaders such as Ma Pingping, a senior overseas-study consultant, and other guests attended the event. All students and parents of our A Level International Curriculum Center participated in this meeting and they were received by the volunteer students. 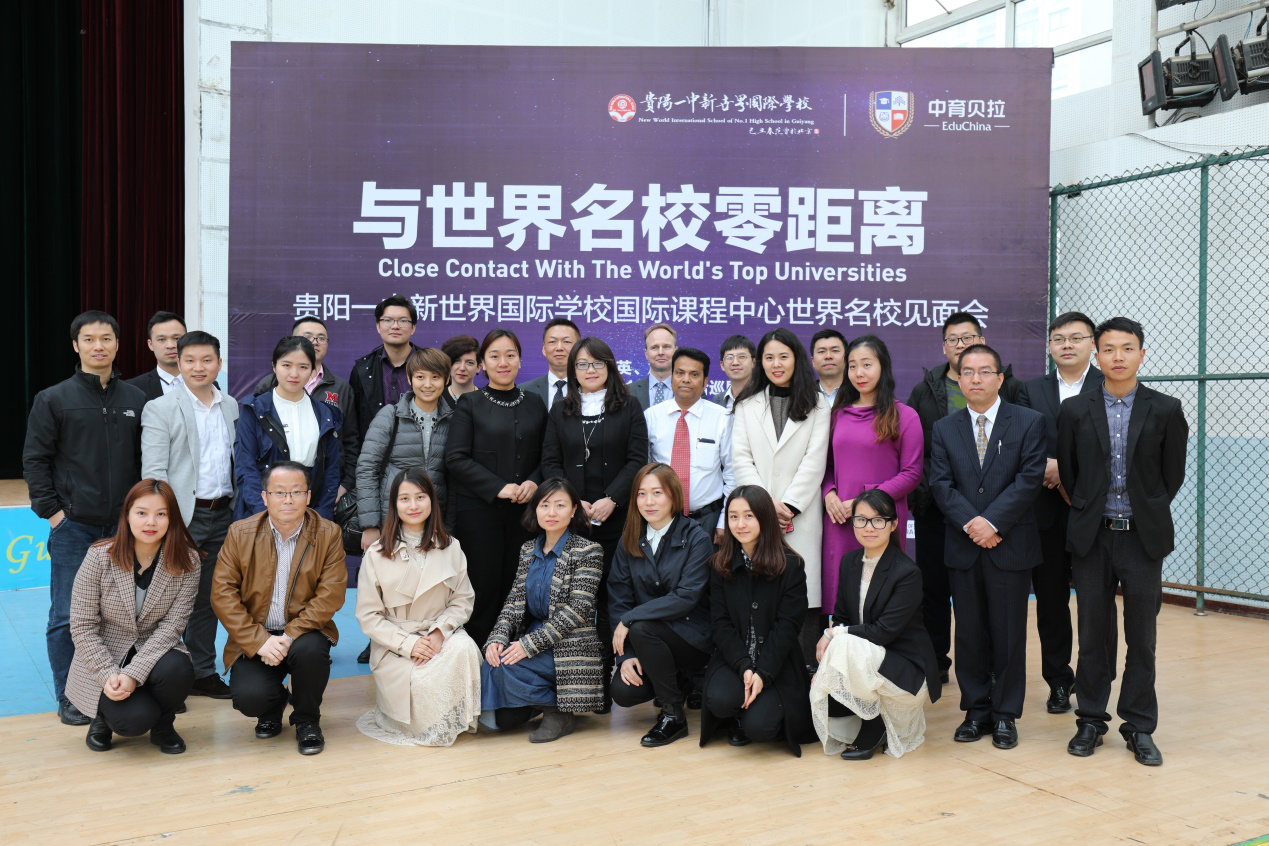 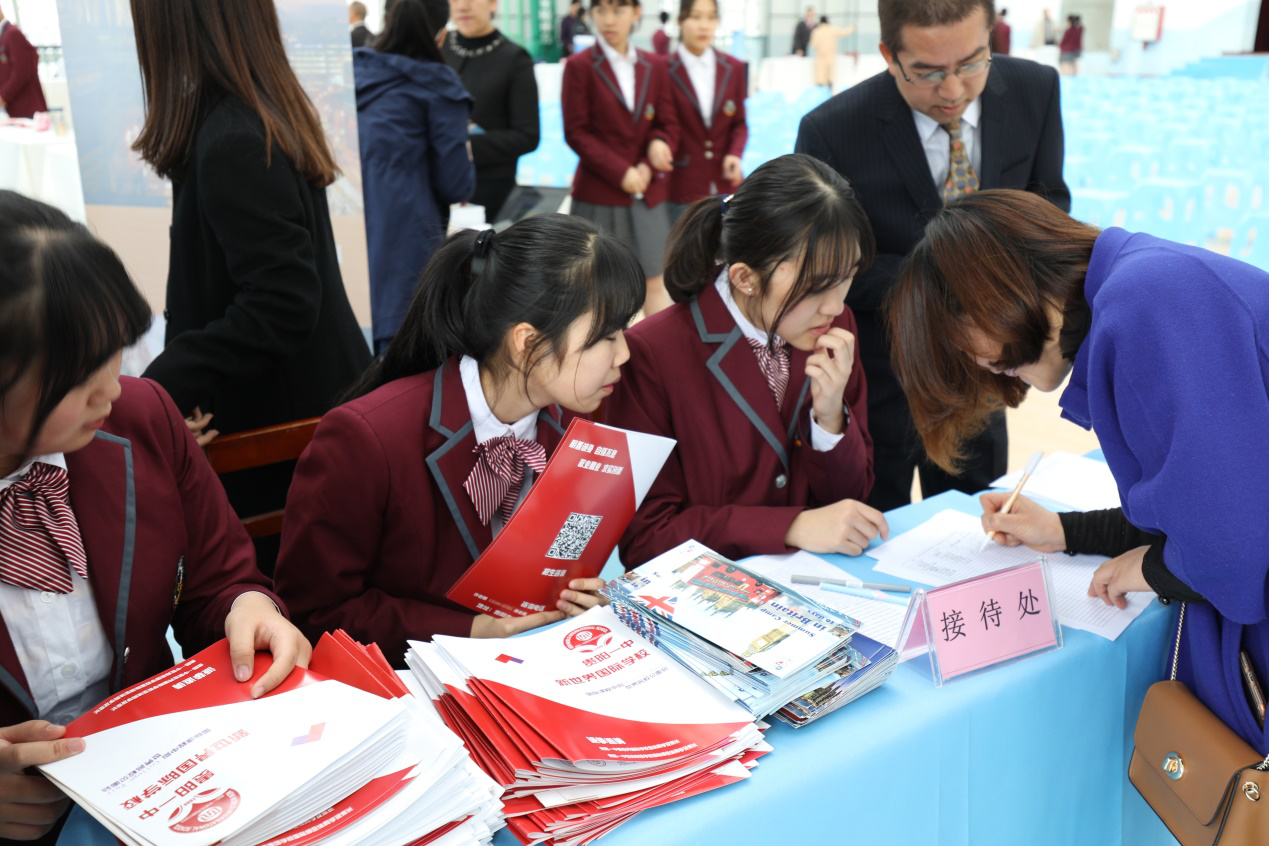 Vice Principal Zhou Lu gave a keynote speech for this event. She first reported the good results achieved by AS students of the A Level International Curriculum Center in the ASDAN Modeling Competition recently, and recalled the progress made since the establishment of the curriculum center. Then Principal Zhou extended her warm welcome to the admission officials from those world-famous universities and expressed her sincere gratitude to the leaders of the Zhongyu Beira Group for their great support for this event. She hoped that the students would make full use of this great opportunity offered by the College Fair, deepen their understanding of those prestigious universities present, make a reasonable plan for studying abroad, set their own goals, and make unremitting efforts to realize their ideals. 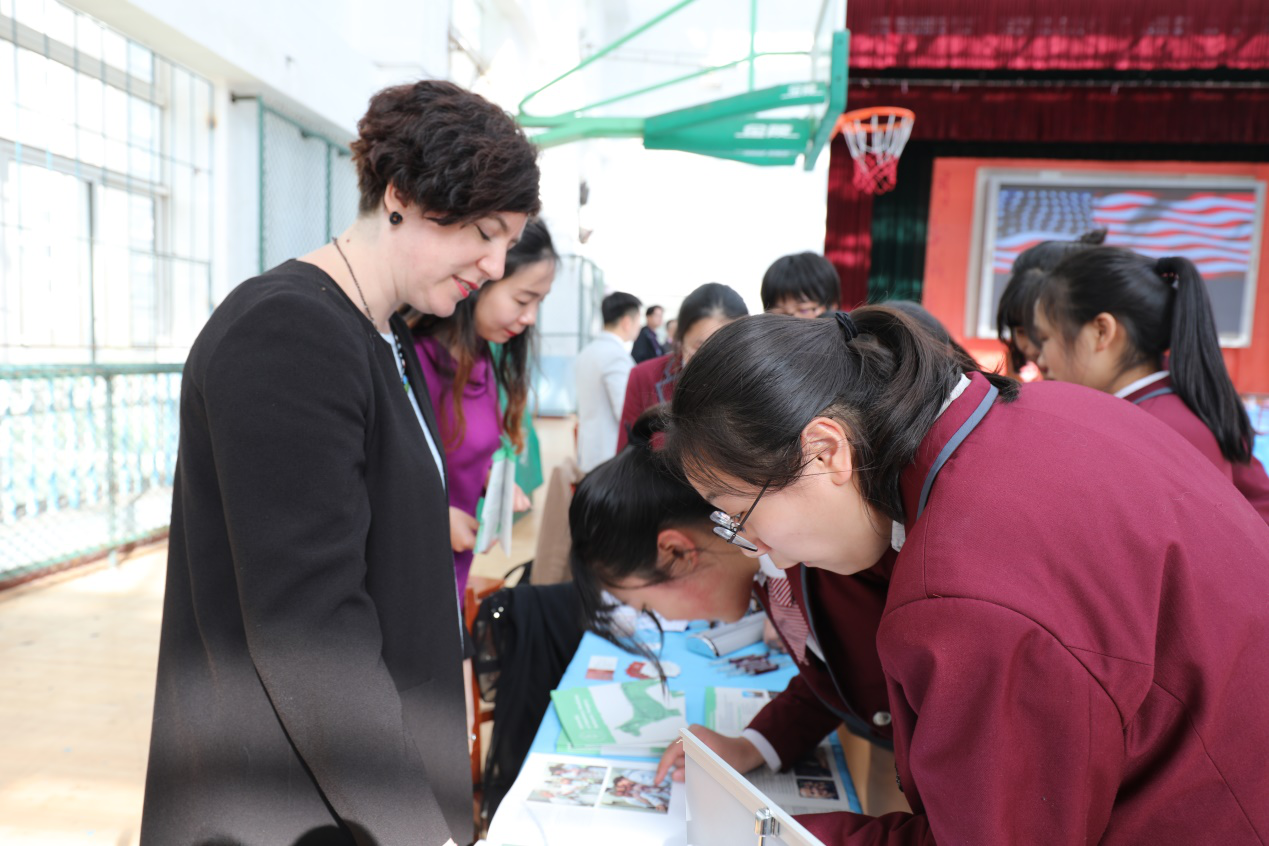 Dr. Stephen Mohan, the Director of Studies in the A Level International Program Center, also delivered a speech. He extended his warm congratulations to the College Fair in Guiyang and highly praised Principal Zhou's hard work for the Center. On the spot, one student from the International Curriculum Center acted as the translator, who impressed the audience with her calmness and confidence.

In the following introduction of famous universities, more than 10 elite admission officers introduced the advantages of their schools respectively, during which parents and students had the firsthand knowledge about the choices of schools for their overseas study. Among the participants, there are quite a large number of world-famous universities such as the University of Leeds, RMIT, and University of Arizona. Parents and classmates later came to the the admission officers to further their understanding of those elite universities. To our surprise, most of the students came to the fair well-prepared. The questions they raised are also very specific, including which should come first, major or university? What should we keep in mind when choosing the major and the university? Detailed consultations were also conducted on issues such as School’s curriculum, Admission requirements and acceptance rates, A Level credits for university credits, and the admission standards for A-level students. School representatives  responded to these questions patiently and meticulously. 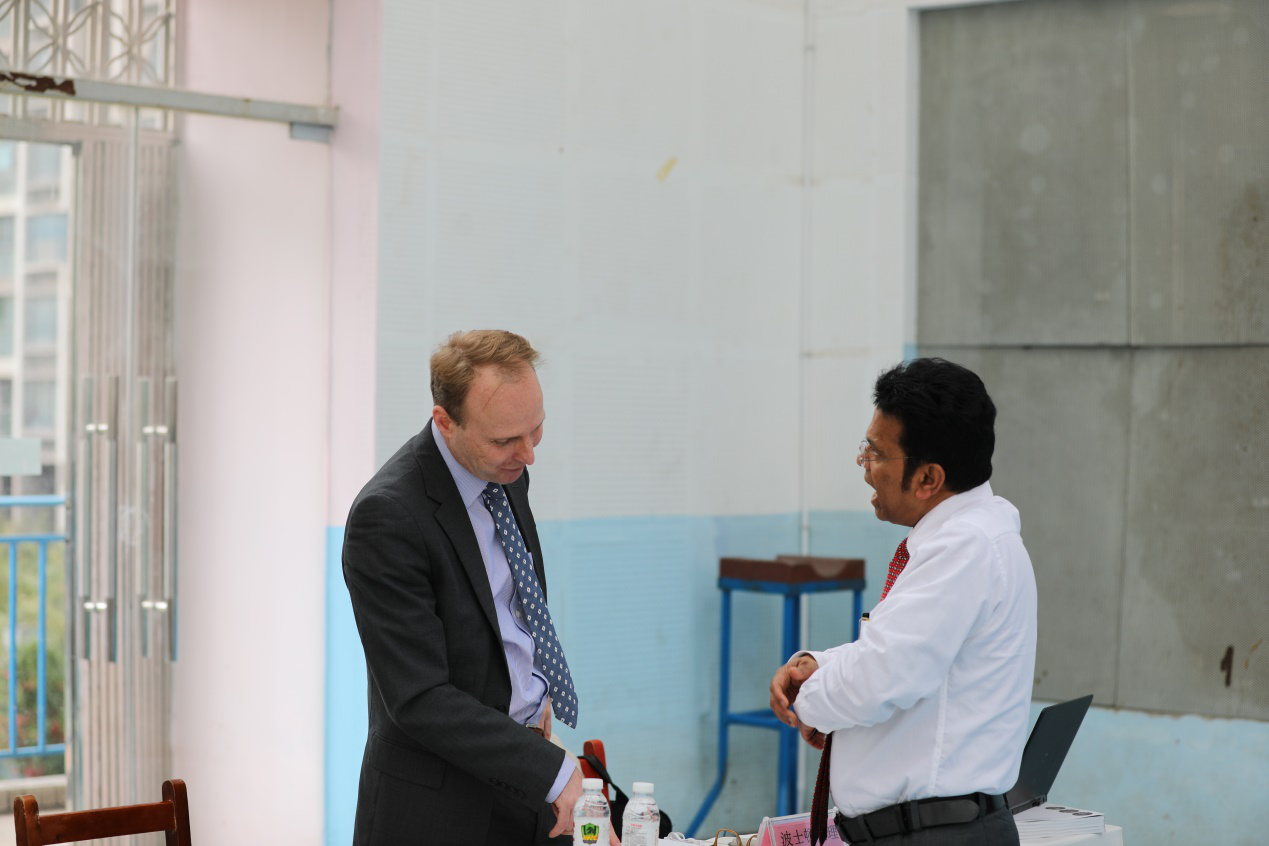 This year's College Fair brings a large number of overseas colleges and universities to the campus. It also provides a great stage for many excellent foreign universities to show themselves. While promoting international education communication and understanding, this event also shows the school’s harmonious international atmosphere featuring diversity, openness, and tolerance.

Given this great opportunity, Ma Pingping, a senior overseas-study consultant held a seminar for all students and parents of the curriculum center on the evening of 19th. In order to assist parents and students in deepening their understanding of the school life overseas, Ms. Ma made a detailed analysis on the status of schools in the UK and the United States, choices of majors, application requirements and deadlines. On the 20th and 21st, students of the AS class were given one-to-one instructions to conduct their interviews.

The College Fair is just a beginning. The road leading to an ideal university is full of challenges and tests. It is believed that with the joint efforts of the school, parents and students, the good dreams of the students will finally be fulfilled!